Amazing film. Will stir you up, make you angry and strengthen your resolve to keep fighting for change.

In this feature-length documentary, Marilyn Waring demystifies the language of economics by defining it as a value system in which all goods and activities are related only to their monetary value. As a result, unpaid work (usually performed by women) is unrecognized while activities that may be environmentally and socially detrimental are deemed productive. To remedy this, Waring maps out an alternative economic vision based on the idea of time as the new currency.

If you haven't already seen it, I strongly recommend you do so.
Recommend this post

I've thought about not writing this.

Our intention when starting this blog was to share our day-to-day lives in the poverty well, to put two human faces on it. It means sharing the decisions we make, the barriers we confront, the silly things we do, our talents, our faults, even certain toilet habits.

The point was to bring home the reality of two lives in poverty and their struggles to maintain dignity and a sense of self-worth. If readers have been following this blog since it launched January 1st, they'll have already detected the inner conflicts, the desire and determination to maintain X and not do Y while ultimately having to do Y anyway, and then the struggle to adjust to the new reality. For life in the poverty well, it's forever a struggle to adjust.

The following I began yesterday, at 2:30 in the afternoon, as I waited for Daphne to arrive with a car to transport Kiltie and I to the SPCA.

I'm crying as I write this.

Kiltie got sick again, was vomiting the past two days. An hour ago, she vomited blood. This condition is new and unlike the two urinary tract infections she had previously. Those appear to have cleared up entirely, thanks to a special diet paid for by a kind benefactor and several hit-and-miss series of antibiotics.

Kiltie and I have been together for ten years, ever since I rescued her when she was about eight weeks old.

Today, I can't keep doing it anymore. There's no money to have Kiltie go back to the vet, again, be examined, again, get x-rays and likely go to surgery. So I must do what I've dreaded having to do these past three years, since she first developed FLUTD. I've phoned Daphne and she's coming over. Together, we're going to the SPCA. They will take care of Kiltie in a way I can't. It's a no-kill, clean, caring shelter with lots of volunteers. I'm bringing the blanket Brodie uses so Kiltie will feel a sense of home; and a full prescription of Cipro that I've had standing by, just in case. 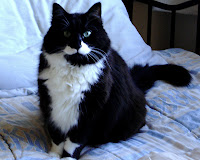 Last night was the first night without Kiltie. Emotionally exhausted, I slept 11 hours. Brodie and I cuddled more than usual, last night and again this morning.

Tonight or tomorrow night we may have Kiltie back. The lady at the SPCA - manager Sandi Trent, it turns out - said they'd prefer to keep Kiltie with me ... if it's possible. That they'd likely not be able to find Kiltie a new home, given her age and maybe needing special care.

Sandi said to leave Kiltie with them for a day or two and for me to call her later today. They'll get Kiltie vet-checked, monitor her condition and see what they can do to support her staying with me... And I'm crying all over again, dammit.

People who make the blanket declaration that poor people shouldn't have pets have no clue.

Did you pick up above that I rescued Kiltie? She's had ten years of life, a good life in a home where she has been much loved. Those ten years she likely wouldn't have had.

Kiltie and Brodie (I rescued him too*) have also been my lifeline. Too many times to count, their presence prevented my suicide. As a mother would feel about her children, I couldn't, wouldn't, leave my two furry companions without someone to care for them. They needed me, someone, to make sure they were alright.

What would happen if I died? I feared no one would take the two cats in or if they did, it wouldn't be a good home, and then they'd be abused or die.

Kiltie and Brodie are the only reasons I kept going through some terrible years, including the years I was doing the WISE project.

I will always need an animal companion. They help me maintain my humanity....

Which brings up the point of BC's anti-pets tenancy act. Rarely in this province can one find a rental unit - private, subsidized or public - that permits animal companions.

*Foolishly, in late 2000 I expected to become employed. Didn't want Kiltie to be alone all day, hence I got a second cat. Never did get anything but brief, contract or part-time employment.

ETA: It's 1:40pm and I've just spoken with Sandi at the SPCA using SkypeOut. Kiltie's vet hasn't returned Sandi's call yet. Kiltie hasn't eaten since she arrived but there's also been no vomiting. Sandi will keep her there another day. We're both thinking Kiltie may not be eating due to stress (as with her human). If she still hasn't eaten by tomorrow afternoon, Sandi may take her home to her place and put her in a room of her own so she might settle down. Either way, there's two of us now concerned with Kiltie's health and I'm reassured that Kiltie is in good, caring hands.
Recommend this post

Are you interested in obtaining an electronic version of the book Policies of Exclusion, Poverty & Health: Stories from the front?

WISE sold out its book inventory early in 2007 - a coup given the book was 100 percent researched, written, designed and published by women in poverty and we sold 1,000 copies. An electronic version of the 192-page book is available in PDF format, suitable for desktop viewing and compatible with devices such as the Sony Reader.

The soft-cover edition sold for $25, plus shipping and handling. The e-book version sells for $9.95. Because it's deliverable by email, there are no additional charges.

Aaron Wherry asks: What, precisely, has gotten into the leader of the Her Majesty’s loyal opposition?

First was Ignatieff's response re prorogation, a shift for the leader from a view he'd expressed only a week before. The man listened, heeded, and re-thought his position. That's what good leaders do; they don't work to stifle dissent and undermine democratic processes.

I agree with Wherry. Ignatieff has had a heck of a good week, with bold new statements and new policies announced almost daily, for example, on unemployment, restoring Status of Women Canada and daring Stephen Harper to support abortion rights, starting up a national childcare program and reforming the Senate.

Am kinda liking Michael Ignatieff 2.0. If he says what he means and keeps to what he says, then there may be hope for a decent Canada after all.
Recommend this post

If these related topics tweak your interest, then there's a discussion and phenomenon happening, led by some of my favourite authors, you just might want to catch.

First, there's Closed Circle, a new site started up by three authors. They'd become fed up with publishers' misuses and abuses of copyright and their 'creative' financial schemes that increased profits at the expense of writers. As a result, the women got together, hatched a plan and set out on their own. Now they've begun selling their books directly to their fans. The primary format is e-book, DRM-free, but they've plans also to sell hard-copy versions for readers who simply must have that treasure on their bookshelf.

Second, the three authors could well be leading the way to a new future between writers and their readers.

Catch Lynn Abbey's blog, for example; she is one of the authors with Closed Circle. (The others are Jane Fancher and CJ Cherryh.) Here's a snippet of a reply to a reader in the comments section of a post Lynn wrote yesterday:

I’ve become a big fan of 'disintermediation' - getting rid of the mess in the middle, which, from my author’s perspective includes both Amazon, because of its DRM and exclusivity clauses, and conglomerate-based publishers.

Here's Jane on the same topic.

Macmillan is following a marketing paradigm designed around supply and demand. S&D is a perfectly valid capitalist philosophy that really came into its own with the mass production of product that came into its own in the 20th century, taking serious hold with the Model T and assembly line production. It is not a given of the human condition....

CJ, Lynn and I want to work with the people who want to read our books. We want to make them available to those who never even knew they existed… because of NY's 'Rorschach' marketing practices (more on that tomorrow). Since we made the decision to make this leap of faith, we’ve been working literally around the clock to find a way to bring you a quality product at a reasonable price that will pay our bills while we write more books.

What I most admire is these women's tenacity and refusal to be brought down by barriers. Been following their efforts for about a year; others of their fans much longer. In the meantime, they've taught themselves everything they need to know, from the ground up: how to build their shopping site, how to transform their books into the various e-formats, and so on. As an avid reader, I am excited by what these women are doing and will do my damnedest to support their efforts and similar efforts by others.

NB: See also the Baen Free Library. It's not the same concept as Closed Circle or Book View Cafe - see Abbey's comment in above link - but it's a step in the (somewhat) right direction.
Recommend this post

Barbara Kay would have people believe (rather than think, which takes some work) that all academic scholarship is sans political activism - except for women's studies.

Well, Barbie (I assume you prefer that to 'Ms'), I've news for you. Virtually all academic scholarship is political. Right from who funds the research institutes, including governments, to the eligibility criteria for student scholarships, the choices instructors and departments make for their courses and programs, the fields students choose to study and where they study them ...

Try telling anyone who studies the Social Determinants of Health or Health Promotion that it isn't political.

Try telling anyone who studies sociology or political science or philosophy or any number of the humanities, including literature, that it hasn't an element of political activism to it.

Try telling a doctor studying infectious diseases that what she does is irrelevant to the political sphere or a physicist petitioning for space exploration isn't engaged in political activism.

Try telling someone who is writing their doctoral dissertation that what they do has no political implications. No matter what the topic, no matter how esoteric, the point is to change or influence how people think about that subject.

LEARNING is a form of political activism. The uninformed citizen is the least likely to be engaged.

But perhaps that's what you would want.
Recommend this post

BC "the best place on earth"

The phrase quoted this post's title is an attempt by the BC Government to whitewash its Olympic message about homelessness.

According to the BC Government's Downtown Eastside 'Information' Centre (DTESIC):

Because we all know homelessness is caused by mental illness, right?

"They say that homelessness is about addiction and mental illness; it's not true," says Wendy Pederson of Carnegie Community Action Project. "We have a housing supply problem. We don't have low-income housing in this city. We have an income problem. We need to raise welfare."

Now that's the truth of the matter but let's not have truth interfere with our propaganda.