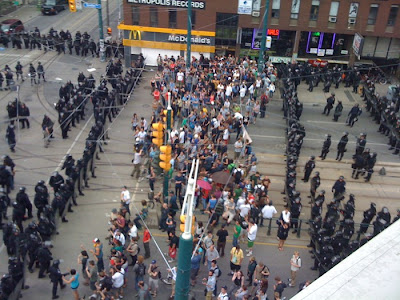 Email ThisBlogThis!Share to TwitterShare to FacebookShare to Pinterest
Labels: Security-TERRAism

If you heighten 'security', deny citizens their rights

... the citizens will gather and they will challenge you.

Stephen Harper, you got things backwards; just like your buddies, who hold aggression to be the only road to peace.

The mere presence of 20,000 armed personnel was the primary act of intimidation. YOUR decision, Harper, to have such a huge security presence, is the chief cause of the violence that was Toronto this weekend. YOU were the primary agent provacateur.
Recommend this post

Fairness in Representation vs. Ideological Identity

I happened upon this news story today, about (now) former Liberal Hec Cloutier planning to run as an independent in the next federal election.

"I met Mr. Ignatieff and he said to me: 'Hector, I would like you to consider running for me because you're the only one who can win the seat back for us.' I said I will consider running, but 'I am going to vote the wishes of my constituents'," Clouthier recalled.

I got a common reply, of the type: 'S/he supports (or is against), or would vote in favour of _____.' (Fill in the blank, e.g.: the gun registry, abortion, censorship, strict environmental laws, Canada's military presence in Afghanistan....

The underlying message of such comments? That anyone who supports _____ or, regardless of personal conviction, would vote in support of _____, is ipso facto a poor candidate for political office; this, despite the majority of constituents in the riding being in support of _____.

Which brings one to a dilemma. In some cases*, fairness in representation aligns well with ideological identity. That is, the Member of Parliament or provincial representative and the political party of which s/he is a member represent the majority view of constituents in that riding.

See, to me, it's no dilemma at all. In a properly-functioning democracy, politicians represent the people. (Nothing in the Canadian Constitution says that political parties have a right to representation!)

If the wishes of the majority in a riding run counter to the wishes of others in the riding, then it's up to the dissenting minority, most particularly in the riding, to work to persuade the others. If the dissenters want to enlist outside help, that's fine, as can the opposing side. At least the two sides are listening and talking to one another, which so often doesn't happen now.

That's what democracy is about. It's messy and sometimes inconvenient.

In a properly functioning democracy, we shouldn't be running roughshod over other people's views. Most particularly, we shouldn't permit unfair political representation of the people just because the people in question hold views contrary to ours.

* I write in some cases because our antiquated voting system and the unwillingness of 'the people's representatives' to cooperate ensure that the majority views of Canadians remain, in fact, unrepresented in our houses of government.
Recommend this post

Prime Minister Stephen Harper is snubbing opposition parties by ending a long established practice of inviting foreign heads of state to meet with them.

No one who follows Canadian politics will be surprised at the above. But then there's this:

“It seems totally normal to me that the leader of the official opposition would have meetings, and the leaders of the third and fourth parties would not,” Ignatieff spokesman Michel Liboiron said.

Except, by long established practice, the exclusion of all but the leader of the official opposition isn't 'perfectly normal'.

If the label fits, wear it: elitist.
Recommend this post

Fifteen solar lamps - at a cost of $207,900 - were supposed to light the way for G8 participants. HarperCo didn't grant the contract for this "signature environmental project" until May 25th. The company charged with supplying the lamps can only provide five lamps within the allotted time. The problem is partly due to the rocky terrain - otherwise known as The Canadian Shield.

Steve Rennie, of The Canadian Press, notes that "the same money could buy almost 14,000 solar-powered Noma garden lights at Canadian Tire. Those lights cost $15 each."
Recommend this post

Email ThisBlogThis!Share to TwitterShare to FacebookShare to Pinterest
Labels: Those Crazy Feds

Alert for USians Living In or Travelling to TO

Yup. Despite one billion loonies spent by HarperCo on security for the coming G20 summit, Washington has deemed it necessary to issue a travel alert. USians who live in or intend to travel to Toronto between now and June 28th are advised to "avoid protests" and avoid downtown TO altogether.
Recommend this post

Ralph Goodale has just said in the House of Commons that the success of the agreement will depend on the "honest behaviour" of all parties involved and he vowed that the Liberals "will continue to be alert and vigilant in the process."

According to Goodale, "all relevant and necessary information will be available."

Relevant and necessary, as determined by whom?

That would be jurists, not Members of Parliament who are the people's representatives. Jurists will review all material - minus legal documents and cabinet records which are to be automatically excluded from the get-go - before ever an MP's eyes should fall upon it.

This sham of a deal, which has enough holes to sink a ship and leaves Harper enough wiggle room for further circumventing parliamentary privilege, was predictable. As was the Liberal-Conservative dance to avoid an election.

Not predictable and disappointing to me was the assent of the Bloc.

The NDP, which has refused to sign on to the deal, has been much more forceful of late. I'm impressed and likin' it.
Recommend this post

Post-9/11 security hysteria - which is costing Canada $1.2 billion and counting for a single shindig - reminds me of the nuclear arms race of the Cold War. It's the philosophy of security or nuclear weapons hypothetically being deterrents for terra-ism or war.

However, so much security creates an atmosphere of fear; and anger at freedoms curtailed. And when people feel fear and are incensed by the injustice imposed by the State, terra-ism and war become more, not less, likely.
Recommend this post