... found a home. But there's a problem concerning their being used as homes. 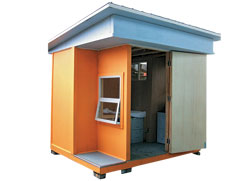 Remember the $1,500 tiny houses that students of the Emily Carr Institute designed for an assignment given them by instructor Christian Blyt? Well for several months the project itself was homeless.

The struggle for the Home for Less Project to be adopted by communities facing a homeless problem couldn't have been more ironic. No Lower Mainland municipality would take them, despite the urgent need for affordable temporary and permanent housing and despite the inclusive philosophy behind the project.


“The main objective ... was a form of three-dimensional communication,” says Blyt. “We wanted to show that with very limited resources, you can create homes for these citizens, and I keep stressing citizens because they are citizens with rights just like the rest of us.”

"Home for Less Project," wrote Blyt in an email to me this morning, "has found a permanent home on Bowen Island through the efforts of the Bowen Community Housing Association and a private citizen that will be donating land where the units will be placed in the beginning of April."

Thank goodness for the volunteer community, grassroots organizing, Mr. Blyt and his students! Had we to depend on government to get the job done, we'd be waiting years and likely by that time, the situation would have grown worse.

TODAY: All of which sounds wonderful, doesn't it? I would be thrilled to live in one of those tiny homes! But then there is this:

While the houses were originally slated to house a few of the Island's twenty-plus homeless people, their arrival was met with scepticism, as many residents worried the mini houses would attract homeless people to the Island.

According to Richard Best of the BCHA the houses will remain empty for the foreseeable future, though they will serve to educate islanders about the need for more affordable housing.

From hope to despair in the space of a single sentence.

Why are people with money or property so afraid of people without it? All any of us want is a place to call our own and a community that respects our right to live a dignified existence.
Recommend this post