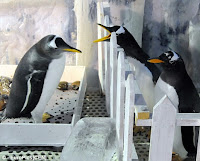 A pair of gay penguins have been given the chance to be surrogate dads.

Last month the birds were segregated after they were caught placing stones at the feet of parents before waddling away with their eggs.

But angry visitors to Polar Land in Harbin, northern China, complained it wasn't fair to stop the couple from becoming surrogate fathers and urged zoo bosses to give them a chance.

"We decided to give them two eggs from another couple whose hatching ability had been poor and they've turned out to be the best parents in the whole zoo,' said one of the keepers...

Wildlife experts at the park explain that despite being gay the three-year-old male birds are still driven by an urge to be fathers.

"One of the responsibilities of being a male adult is looking after the eggs. Despite the fact that they can't have eggs naturally, it does not take away their biological drive to be a parent,' said one.