Sometime Friday, this building lost its hot water. The Resident Manager says it was a cracked pipe somewhere down the line - and no, it wasn't due to cold weather, but the age of the plumbing.

This building is about 40 years old and over the six years that I've lived here, has been allowed to deteriorate without any maintenance done. Finally, however, the roof was replaced, a recent job which took four weeks to complete. Due to the roofers' lack of caution - dropping heavy loads rather than placing them, for example - the job caused further damage to units on the top floor, of which mine is one.

My unit already had fairly extensive drywall damage around the window due to the leaking roof and poorly framed (single-pane) windows. Now it has lost its overhead kitchen fixture and there appears to be further structural damage.

So this time, it's the hot water that's gone kablooey. Just when the Cowichan Valley has turned into Ontario's snow belt. The likelihood that the plumber will arrive today to continue the work he began on Friday is ... well, let's just say it's hoped the man has a horse-drawn sleigh. 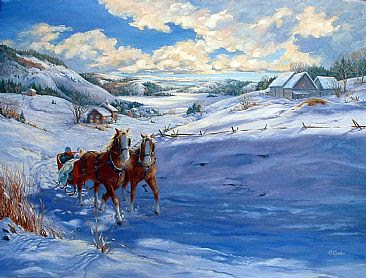 As for the owner of this property, he should reduce the rent for all tenants. 'Course the likelier scenario is he'll raise our rents higher than usual, using the new roof and plumbing repairs to justify the hike.

PS. It's also cold in here. A few days ago, we were without heat for 36 hours. Feels like the heating system is still having its problems.
Recommend this post