It would seem that the Sahota family in Vancouver have a reputation for collecting rents, harassing tenants and allowing rental buildings to fall into dangerous disrepair and getting away with little, if any, penalty.

When heavy rains caused ceilings to collapse at a rundown East Vancouver apartment last year, the building's 81 tenants had three hours to collect their belongings and move out. What they couldn't grab was stolen or lost to water damage and mould. Rodents, cockroaches and bed bugs infested the rooms that weren't flooded.

The calamity at 2131 Pandora St. on Oct. 18, 2007, shocked Vancouver and caused an untold amount of financial and emotional hardship on the low-income tenants that lived in the building. But it was just the latest incident involving one of Vancouver's most infamous landlords, the Sahota family. 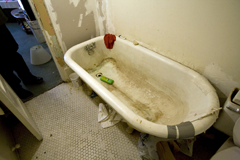 This alone would be excellent reason to pressure the Federal government to fork over some of the money gleaned from taxpayers to provide social housing programs in our country. Since Harper and the neocons have been elected, they have consistently slashed social funding with as much disregard for people's welfare as the Sahota clan.

While the workers of Canada struggle to house and feed themselves, Harper and the Sahotas ignore repeated requests to use some of the money they collect - from taxpayers in the one case and from renters in the other - to upgrade their investments. For the Sahotas that would be rental units and for Harper, it would be housing for Canada's working poor.
Recommend this post