Bill? Doug? Which Routley is Our Candidate?

An item appeared in the Lower Island News recently, written by Dee Shoolingin. It described the average day for a volunteer working in the campaign office of a mid-island NDP candidate. 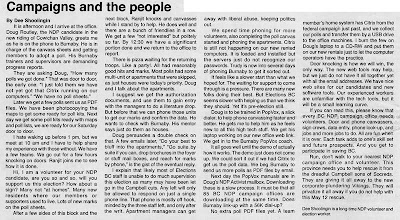 A number of things shocked me about the article, but my attention was grabbed the most by Shoolingin's repeated reference to working on the DOUG Routley campaign.

Now that's all well and good; except that Shoolingin claimed to be working in the NDP office of the "new riding of Cowichan Valley" - whose NDP candidate just happens to be BILL Routley (no relation to Doug).

DOUG Routley, MLA incumbent for the old riding of Cowichan-Ladysmith, is running in Nanaimo-North Cowichan. BILL Routley is the recently nominated NDP candidate running in this, the new Cowichan Valley riding.

Not only did Shoolingin describe illegal activities (stuffing mailboxes?!) which these people were doing or being encouraged to do, but the article itself appears to be a deliberate attempt to plant the perception that the Routley candidate for this riding is the same Routley who represented us so well over the past four years.

While I understand from a friend that BILL is a nice man, there are many who think he has made a terrible candidate. Moreover, the deception and dishonesty which is revealed in Shoolingin's article challenges the notion of a NDP campaign run on honesty and intended to be about "taking back our province."

Now one might suppose that this volunteer was simply confused - but for the fact that Shoolingin is described as a "longtime NDP volunteer and election worker." Such a person would confuse, each and every time, DOUG with BILL?

Wouldn't this item have been vetted by the campaign before leaving BILL's office? One would assume so; in which case, we've clear evidence of the BILL Routley campaign attempting to trade on DOUG's good name and a deliberate attempt to mislead voters.
Recommend this post