See email response from Simon below...

The 2009 Student Vote stats for the recent BC election reveal that Simon Lindley, Green candidate for Cowichan Valley, placed second by only two votes to first-place finisher, Bill-not-Doug Routley. 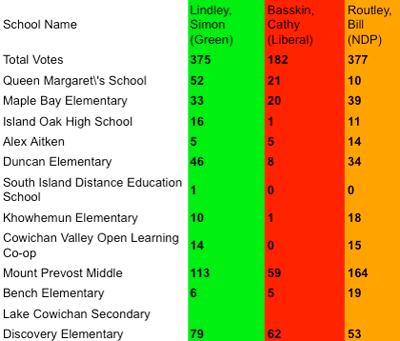 These numbers bode well for Lindley in 2013, given he was among the few candidates who substantially improved the Green vote in his district in an otherwise lacklustre election, and his commitment to stay here and build a strong Electoral District Association.

EDA: I wrote an email to Simon, telling him of the results of Student Vote 2009. The following was his response:

It’s wonderful news, and a point about how vastly different the vote would be if long-held habits and attachments were stripped away in favor of informed decision-making.

Our youth understand very clearly the challenges the future holds for them, often more so than their parents, who may not look beyond their day-to-day wants to view the true state of the earth and the conditions they are leaving to their offspring. There are statistics that unfortunately speak to this. The average parent spends 11 times the amount of money on entertainment and non-essential items than they do on their own children, including education savings and trust accounts. The ecological and economic credit card is being racked up for our children to somehow pay off. I constantly hear children say, “well, why don’t we just stop doing all these bad things?”

Their vote is the most valuable. Too bad their parents aren’t always listening.

Over the course of the next four years, I will work even harder to connect to the Cowichan Valley, bringing out guest speakers and hosting workshops, but a large focus will be with our youth. In four years, many of them will have the power to vote, the ability to make profound changes. I only hope they remain as inspired for change then as they are now.

I may never win a seat, but I will never abandon my goal of bringing about the necessary changes our good earth so desperately needs, if not for my own generation but for theirs.

Have heard rumours of leadership potential. As long as Simon remains in this district, fine. Otherwise, go look for your leader elsewhere.
Recommend this post