Bush is Coming to Canada - Again 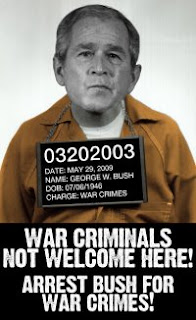 From Toronto Coalition to Stop the War:

From launching an illegal war on Iraq that has killed over one million people, to advocating torture at Guantánamo Bay and secret detention centres around the world, Bush has lots to answer for - and should be held to account. Join us for a city-wide rally on May 29 - the day that Bush is slated to speak in Toronto - to demand that he be charged and arrested for war crimes.

One week earlier, on May 22, join us for a public forum to hear international law experts and civil liberties campaigners explain the myriad of crimes committed by the Bush administration, and to find out how Bush could formally be charged with war crimes in Canada. Also find out how other US leaders - including former US president Bill Clinton, who will appear with Bush on May 29 - could be charged with war crimes, too.

Don’t let Canada be a haven for war criminals.