Khadr to be Tried in Guatanamo

Time for a reminder about the Harper government's failure to intervene on behalf of Canadians who face injustice outside our borders. 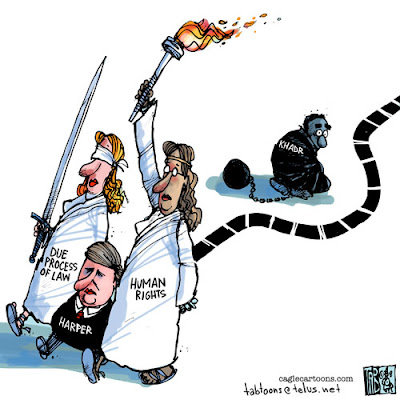 Guantanamo Bay detainee Omar Khadr's trial before a U.S. military judge has been rescheduled for Nov. 10...

Khadr, who was born in Toronto, is the only Westerner remaining in the controversial U.S. naval prison in Cuba. Captured by U.S. soldiers in Afghanistan in 2002, he was due to start trial before a military tribunal on Oct. 8 on charges of murder, attempted murder, conspiracy and supporting terrorism.

The trial was delayed last week amid defence and prosecution wrangling over access to evidence and other legal issues...

The Nov. 10 date means the trial will start after both the Canadian and American elections.

Kuebler said the elections will have little impact on Khadr's fate, and whether his trial will go through.

"Omar Khadr's best chance for justice is that the Canadian government does something for him," said Kuebler.

"It really is a question of Canada's basic identity and commitment to its fundamental principles: Is it a country that stands for the rule of law, or is it a country that identifies itself as the U.S.'s little brother to the north?"

Khadr, who turns 22 this week, has been in the facility for six years. He was 15 when he was captured during a firefight in Afghanistan and accused of throwing a grenade that killed an American medic.

His trial will be held in Guantanamo Bay, where Khadr and some 270 others accused of terrorism or being enemy combatants — most without charge.

Prime Minister Stephen Harper has come under fire for refusing to call for Khadr's return to Canada and has said the judicial process is already underway in Guantanamo Bay and must continue.

The Harper Conservatives' also quietly changed the policy of the federal government to demand extradiction of criminals facing the death penalty in other lands.* And they nixed the plea deal, already made between Marc Emery and the US government - for his selling marijuana seeds by mail -, which would have seen his sentence reduced by half and to be served mainly in Canada.

* If you can help by providing the link to a news article on the death penalty extradition issue, I'd appreciate it. A cursory google didn't deliver it up for me. Also, the cartoon above appeared July 17th in the Calgary Sun and was picked up three days later by TruthDig.