How fundamentally different are these in terms of shaping how we perceive the world and our role in it?

Atheism, deism and theism each posit an unique position with respect to the notion of a omniscient, omnipresent supreme creator.

Professional religionists work to sell their favourite flavour of theism.

Atheists don't so much try to sell rationalism as attempt to defend it against theism, particularly blind faith. 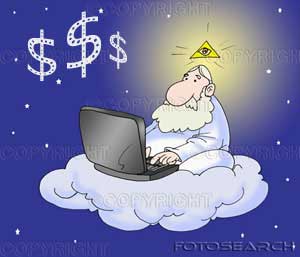 The raison d'être of the Wee Three (formerly Big Three) is to sell people not only individual cars but an entire culture in which the North American automobile rides dominant.

Sellers of televisions, iPods, "homes" (how can you sell or buy a HOME?) strive to sell people not just their products but a whole way of life. Typically, new houses are built in suburbia. New transportation arteries accompany development. The new homeowners cannot walk or cycle to and from work since their place of employment is, conveniently for the auto makers, kilometres away from their new bedroom community.

Selling society on the philosophy of consumerism - on selling it to accept a transformation in which certain products and services become needs - is fundamentally no different than selling society on a way of looking at the world and the human role in it.

Is not environmentalism a worldview? Is not capitalism?

If the makers of cars, iPods, television sets, can collectively promote their consumerist ideology through advertising, then no valid argument exists which warrants barring atheists from buying ads to sell rationalism.

Were atheists to sell rationalism it might end the sale of religion.

If rationalism captured the imaginations and hearts of the people, perhaps we'd reduce the greed driving us to destroy our planet, greed driven in the names of "free" trade, perpetual "economic growth," and "competition."