Ocean's Idea turns up in UK!

Well I DID openly muse to friend Daphne when we were in Victoria two summers ago that it made sense to me to have governments use the land they own to grow crops, rather than have them spend huge amounts to maintain pristine landscapes and - lots of grass.

I even ventured to suggest that allowing members of the public to garden on these lands would reduce substantially the cost of landscaping. Fruit trees and veggie gardens can be attractive in their own right, after all.

AND, I suggested, there could be free lunch provided from the publicly grown food on the days during which legislatures and Parliament are in session.

Well, at least some of that is going to get done if the UK's National Trust has its way!

The National Trust is seeking to persuade every household, office and company to grow its own vegetables in a campaign that will create 1,000 allotments on its own land.

Gordon Brown is being urged to plant a vegetable patch at 10 Downing Street, and down the road the trust is to practise what it preaches by letting staff dig up the garden of its Westminster premises.

Could it happen on the pristine lawns of Victoria's Legislature? 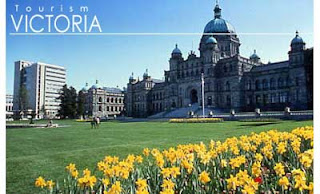 Yes, and yes. But likely there'd be no support from the powers-that-be for such a practical idea.

Which makes this one of those examples in which could should imply should.
Recommend this post